Watchmen on the wall ~ Denver 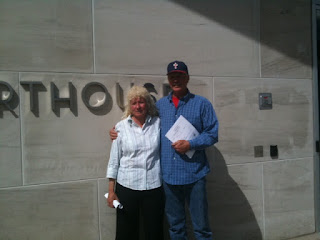 Two of America's modern day heros are under severe attack in Denver, Colorado and the Christian church is nearly completely unaware and sadly, uninterested.

Ken and Jo Scott who rescue babies at Denver's death camp nearly every day the killing happens were served
yesterday with a federal lawsuit alleging they have violated FACE ~ Freedom of Access to Clinic Entrances.

Jo was in court to be sentenced for an unjust verdict that she "detained" and "hindered" and used language intended to "provoke a response" in front of a "healthcare facility." And so while in court to be sentenced to 270 days in jail with 180 suspended, evil Planned Parenthood and their minions in the BHO "Justice Department" piled on with the FACE lawsuit in order to paralyze the biggest obstacle to their continuous cash flow at Murder, INC!

As Mike Martin who attended Jo's trial noted, "If the case against Jo Scott sticks, anyone carrying a sign that says, "abortion kills children" or displaying a poster showing the results of abortion could be accused of conveying a message likely to "provoke a response." Consequently, presenting the truth about abortion would essentially become illegal since any communication about the subject might "provoke a response."

The abortion industry has long sought means to outlaw the efforts of anyone attempting to save babies -- to use the color of law to subdue their opposition. Of course, Jo Scott is their favorite target since, over the years, she has convinced at least 1000 mothers not to abort their babies. If the average fee for those abortions was $300, Jo has cost the abortion industry around $300,000. Small wonder she frequently finds herself falsely accused."

According to the Denver Post article which can't be posted in another First Amendment attack on bloggers, Ken and Jo block the entrance to the death camp and tell clients that God hates them.

In my hundreds of hours of rescuing along side these two saints who have saved nearly 1,000 babies from the abortionists knives over the past decade, I've only heard them say "God hates the hands that shed innocent blood" !

The scriptural imprecation to the killing "docs" and their clients is Ken's calling. He lives and breathes Ezekiel 33:8-9, " When I say unto the wicked, O wicked man, thou shalt surely die ; if thou dost not speak to warn the wicked from his way, that wicked man shall die in his iniquity; but his blood will I require at thine hand. 9 Nevertheless, if thou warn the wicked of his way to turn from it; if he do not turn from his way, he shall die in his iniquity; but thou hast delivered thy soul. "

Ken and Jo have lived their lives rescuing those being unjustly led to the slaughter ~ Proverbs 24:11

May the body of Christ in America emulate these dear servants, stand by their side in fighting this evil lawsuit and pray for our nation that has seriously lost its way!
Posted by Leslie at 6:55 AM

Is there anything we can do besides pray for Jo & Ken?

Have you all seen the Stage Play the secret is out?