It has been a very instructive week since Chick Fil A was observed catering the Houston Women's Clinic. A wonderful young Abolitionist, Caleb Head, tried to speak with the delivery person who actually turned out to be a manager at the Holcombe CFA store.
Caleb posted this photo of the Christian business shortly after the incident. 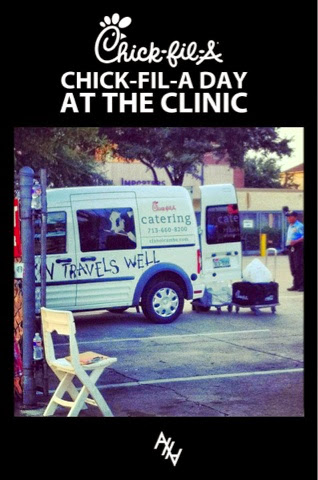 It wasn't long before a good deal of abolitionist buzz was generated and calls to store operator, Juli
Salvagio were encouraged. 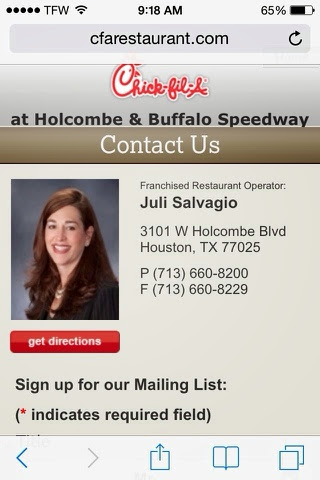 Amazingly, the standard reply from Juli was that Chick Fil A serves everyone with "dignity and respect."
When questioned about whether the children being killed that day were given dignity or respect, calls were hastily ended.
Caleb's parents got involved in clarifying and deconstructing the PC response and in an incredible Rapid Response, A//A brought the horror of what our favorite Christian business was actually doing to light. 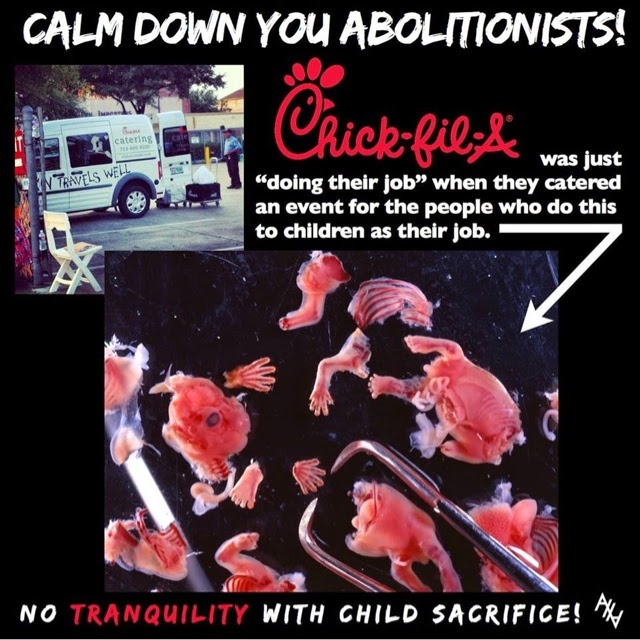 Here's the email exchange by Caleb's Dad & Juli. His excellent analysis and rebuke of Juli's failure to address the real question at hand is most instructive.
"Email interaction between Scott Head and CFA Holcombe's owner, Juli Salvagio:
Scott Head:
Sadly, this store serviced one of Houston's busiest abortion clinics with delivery this morning. The delivery truck parked right by many Christians protesting and many sidewalk counselors pleading for the lives of the unborn today. The delivery man was warned and told that this business was even then killing 40-50 babies this morning (it was hugely busy as it is every Saturday.) The delivery guy went in anyway.
Upon contacting the Holcombe store, the manager on site said he did not care, he was just selling chicken and did not know what kind of business it was. Juli, the franchise owner, did not return calls. I was hung up on. Others were too.
Ignorance is no defense in legal cases, and in this case, the representative of CFA, in the branded vehicle and with warnings about the business, still chose to disregard the calls to deny service to those who kill babies. This is an utterly un-Christian, pagan practice and CFA is now associated with this business?
Photos of the Chick-fil-a delivery truck Houston Women's Clinic on 4800 San Jacointo are already spreading across the internet, it is time to make a public statement denouncing such business practices and to insist on a corporate policy that avoids sullying the name of Christ in this manner.
While you stood for marriage, will you not stand for the sanctity of life?
Thank you,
Pastor Scott M. Head
_________________
Mr. Head:
Thank you for your comments.
Our restaurant was simply fulfilling a catering request. Our goal is to serve great food with genuine hospitality to all guests. We have no political or social agenda.
We strive to serve everyone with honor, dignity and respect.
Respectfully,
Juli Salvagio Owner, Chick-Fil-A at Holcombe and Buffalo Speedway Operator
______________
Juli,
Thanks for your reply, but truthfully, the ruthless killing of babies by abortion is not a political or social matter, it is a barbaric practice that all decent people ought to be concerned about.
You represent a company that has a particular learning and reputation toward Christian ethics, whether you are a Christian or not. Your company, though you are an independent owner, still represents the founder's ethic. Knowing other independent franchise owners personally, I know they are free to do as they wish, but wise owners also support the general business and brand perception. Chick-fil-A will surely suffer, and your business in particular, if you stand by and give Nazi-esque answers when confronted about supporting abortionists like Rosenfeld's HWC.If you remember, the Nazis who serviced the holocaust perpetrators also said "we are simply fulfilling a business order." Yet these same businesses (like BASF, who supplied Zyklon B to gas Jews, for example) were held responsible by courts for war crimes.
Your ambivalency about serving abortionists is certainly on the same level. Christians around our city call on you to refuse to serve such barbaric murder places, and will continue to be active in opposing your particular franchise as long as you do.
With deep disappointment,
Pastor Scott M. Head"
Beyond the lame and unacceptable response from the Holcombe CFA, it wasn't long before all kinds of "Christian" apologists for Chick Fil A's decision to serve our modern day equivalent of a Nazi death camp began posting incredibly shallow replies reflecting the ear tickling that goes for preaching in our lukewarm American "churches".
This "Christian" wrote this in response:
Matt N Rebecca Williams
"That's a bit ridiculous. If they place an order there is no reason to not deliver it. It is a business. Chick Fil A can support life while deliver food to whoever orders it. Just like the serve every other sinner. Christ went to the homes of known sinners and ate with them. Do you really think this is showing God's love? Where is God's goodness? Read Romans 2:4 sometime and understand that boycotting is not going to change anyone's heart. And the hearts that need to be changed is not the Chick Fil A's but the abortion clinic. Maybe those Godly examples of employees graciously serving and representing Christ will impact their hearts. They definitely won't with your approach. In short, your "self evident truth" is a load of cr__." - Matt
The most interesting fallout of all the professing believers is the claim that all sin is equal. Dismembering a baby is no different from telling a lie in their world view and, "Thou shall not judge" is their mantra.
Oh, that they had the historic perspective necessary to prompt spiritual discernment! 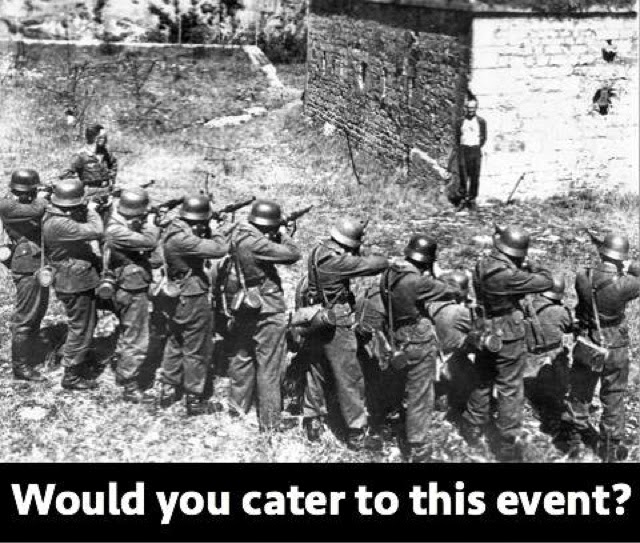 Please contact Juli and CFA Corporate to share your disgust with their, "just doing their job"
(404) 765-8000
And please don't be a Nicer Than God Christian ~ http://kgov.com/nicer-than-God
"A post by Abolitionist Toby Harmon:
"Planned Parenthood is holding it's annual fundraising banquet. You are a Christian restraunt owner and they really want to serve their donor guests your food. As a Christian, do you cater it?"
Shane Tammi Dodson responded:
"Yes, I would. And use the money for the kingdom of God."
Posted by Leslie at 9:17 PM

You have just introduced a way for Christians to make a lot of money for missions and evangelism: become abortionists. After all, abortionists make a killing--financially, as well as the other way.

And why not? The unavoidable force of your logic is “the end justifies the means”: If ultimately the proceeds are given to God, then that automatically sanctifies the means by which those gains are gotten, right?

After all, God never forbade “doing evil that good may come of it”, did He?

You have just hit upon a way for Christians to make lots of money for missions and evangelism: become abortionists. After all, abortionists make a killing--financially, as well as the other way.

The force of your logic is “the end justifies the means”: i.e., if ultimately the proceeds are given to God, it makes no difference how the money is acquired.

Good thing God never forbade “doing evil that good may come of it”.